This blog is published chronologically. Go straight to the most recent post.

One week in Melbourne 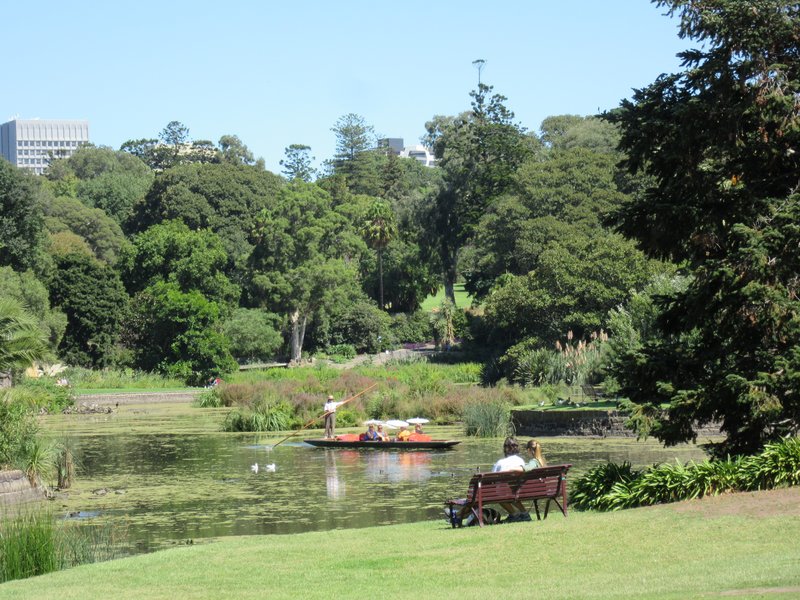 As I live in Brisbane, Queensland, so Melbourne is south of the border and the inhabitants are known as Mexicans.

I have been many times to Melbourne, but on this occasion I had a lot of time to take in the sights and have a really good look around the city.

It was in March, Autumn which was a very pleasant time to visit Melbourne, especially as I was doing a lot of walking.
Melbourne is a city that I really enjoy mainly because of the huge variety of things to see and do, there really is something for everyone. Each time I return I find more, and I know after this last visit that I want to return again and see the new sights I found but didn't have time to see!

I guess you could say I LOVE MELBOURNE!

A LITTLE ABOUT MELBOURNE

Melbourne is the youngest of all of the 'world cities'.
It has the world's third largest Greek population, only Athens and Thessalonki have larger Greek populations.
It lays claim to Australia's culinary capital, for sure you can find food from around the world in Melbourne.
Melbourne is the sporting capital of Australia, hosting international events such as the 1956 Olympics, the Australian Formula 1 Grand Prix, Australian Open Tennis, 2006 Commonwealth Games and Australian Rules Football grand final.
Melbourne holds many festivals and events through-out the year, including the famous Melbourne Cup Racing carnival which has horses from all around the world competing for the $6.2 million in prize money. 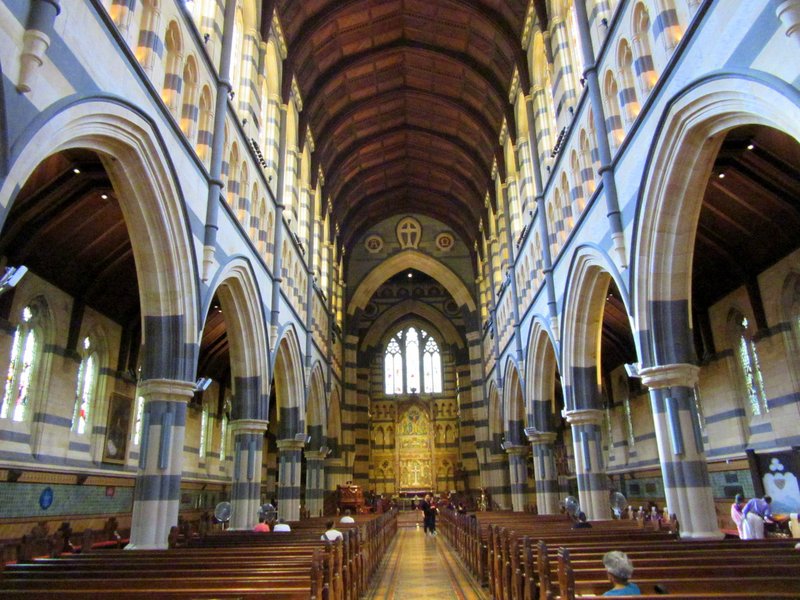 I always check out walking trails where-ever I go, so for 6 days in Melbourne I did the same.
Melbourne has excellent trails to follow, all have free brochures with the name of the trail, this one is "Walk in the Park," a map with numbers of where the important sites are located and information on every-one of those sites, for me, it is the way to go to see the best Melbourne has to offer.

The walks always begin at Federation Square, but if you have the free map you can really begin anywhere and complete the loop, this is what I did.

This walk took me across the road from Federation Square to the beautiful St. Pauls Anglican Church, the cathedral church of the Diocese of Melbourne and the seat of the Archbishop of Melbourne.

The Cathedral is built in Gothic transitional style from sandstone and lime on the site where the first Christian service was held in Melbourne in 1835. It is hard to imagine when built, St Paul's was the tallest building in central Melbourne and dominated the city's skyline, sadly it doesn't do this anymore.
When I walked into St. Paul's Anglican Cathedral I was immediately attracted to the stone work, cream limestone banded with bluestone - stunning!
The floors and walls are beautiful, as they are covered either in marble , granite, alabaster and beautiful rich imported tiles in many different patterns. The Cathedral has a beautiful ceiling made with Karri wood from Western Australia, there are beautiful altars and organ, pulpit, beautiful wood carvings, stained glass windows and more.
TAKE NOTE- If you wish to take photos you have to buy a $5 photo permit. 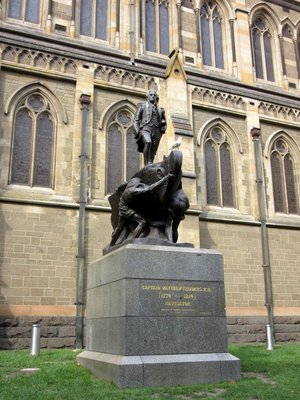 On the side of the Cathedral is an impressive memorial to Captain Mathew Flinders, remembered by Australians as the first to circumnavigate the island of Tasmania, plus circumnavigate and map Australia for the first time in 1803, a voyage he began in 1801.

As I walked along Flinders street, I came across Hosier Lane which is covered in street art, something Melbourne has become well known for. 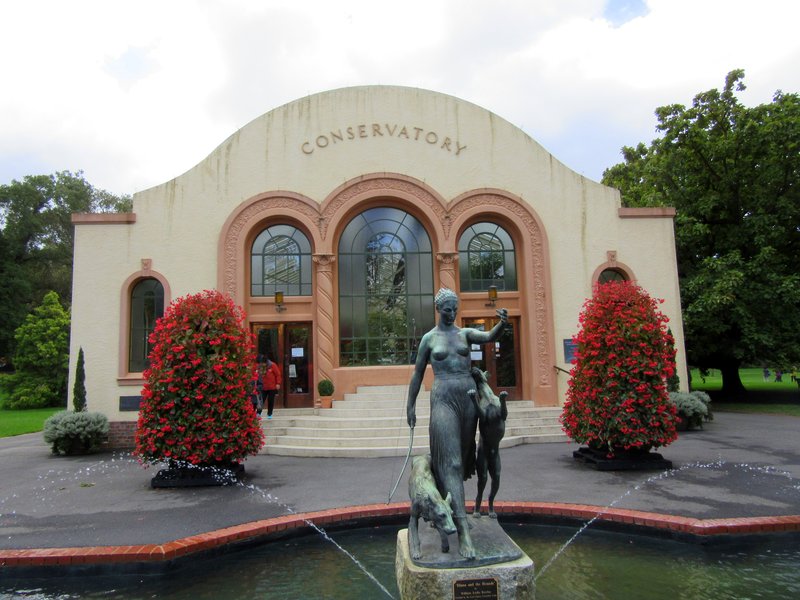 I must say I love gardens as I'm a keen gardener, but you don't have to be a keen gardener to enjoy them, for this walk took me to Treasury gardens and the much larger Fitzroy gardens where there is heaps of room for picnics and parties.

Treasury gardens is where many office workers sit on the lawn and have lunch, it's also where community events and rallies are held. If you haven't seen a possum in the wild, then you have a good chance of seeing one here at night. 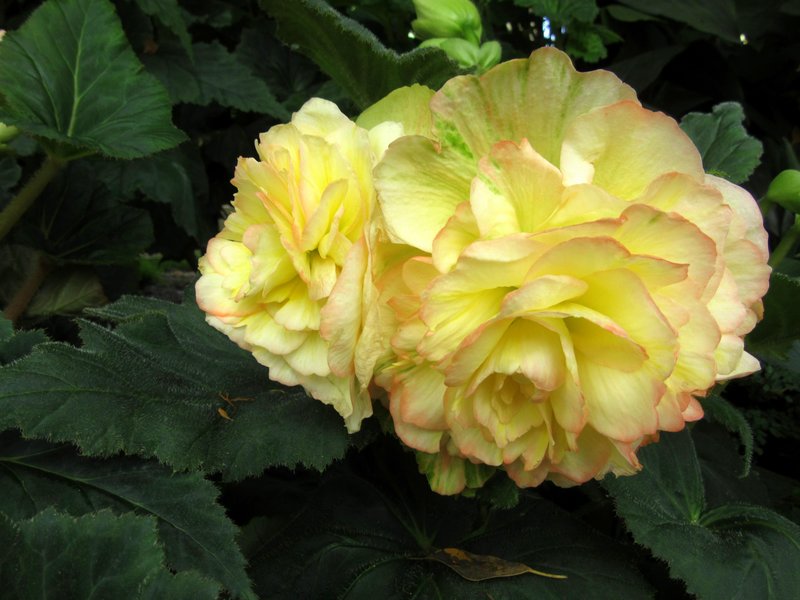 I crossed over Lansdowne street to enter Fitzroy gardens which were definitely my favourite of the two. My first stop was at the Spanish Mission style Conservatory which is open to the public unless displays are being changed.

Hydrangeas and fuchsias bloom from November to February
Begonias and Gloxinias from February to April
Tropical plants and Poinsettias from April to July
Cinerarias and Cyclamens from July to September
Schizanthus and Calceolaria from September to November. 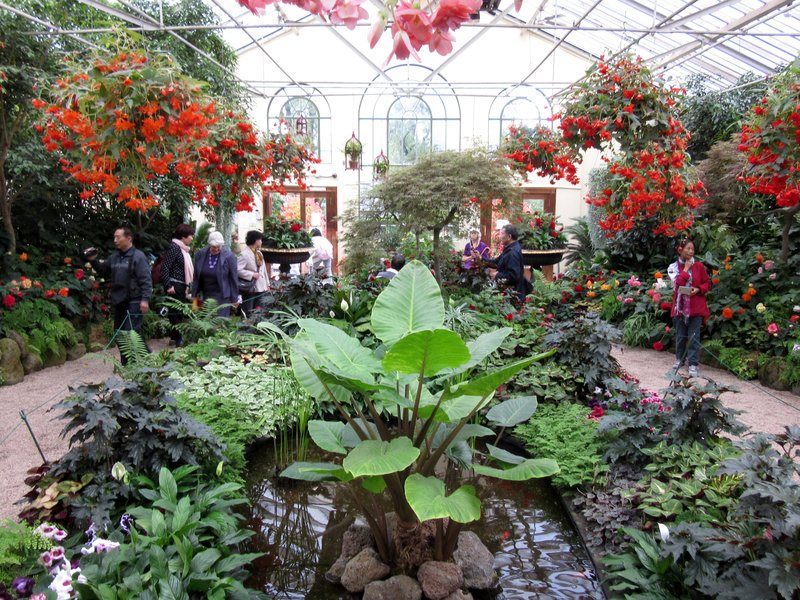 I was here in May when Begonias and Gloxinias were flowering, I love begonias so was pretty happy about that! There was tour group there and it was really crowded inside, so I waited outside a short while until most of the tour group had gone, it was much better for moving around in the small area and for taking photos. Begonias are a beautiful flower and even though they were in pots, they looked like they were growing in the ground. There were masses of colour in hanging pots, a small stream with a wooden bridge and many beautiful maiden hair ferns overhanging the pathways, it was a beautiful sight! 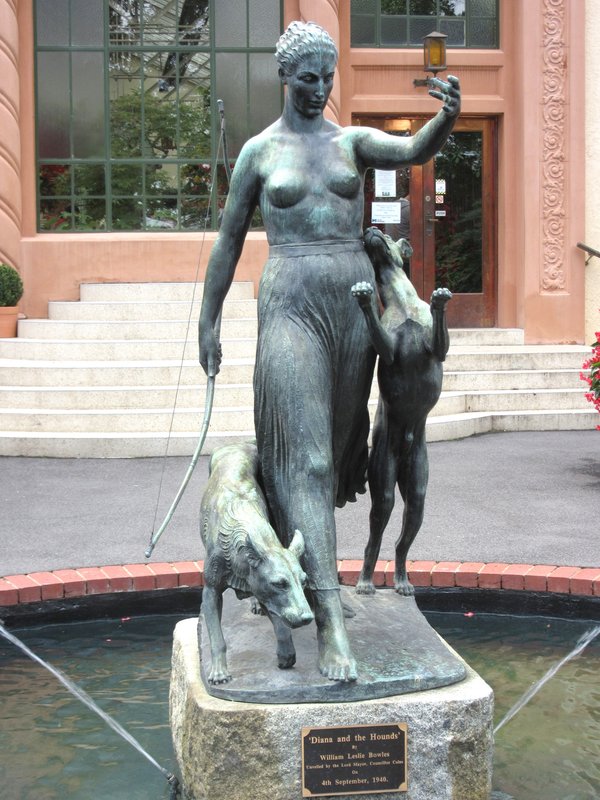 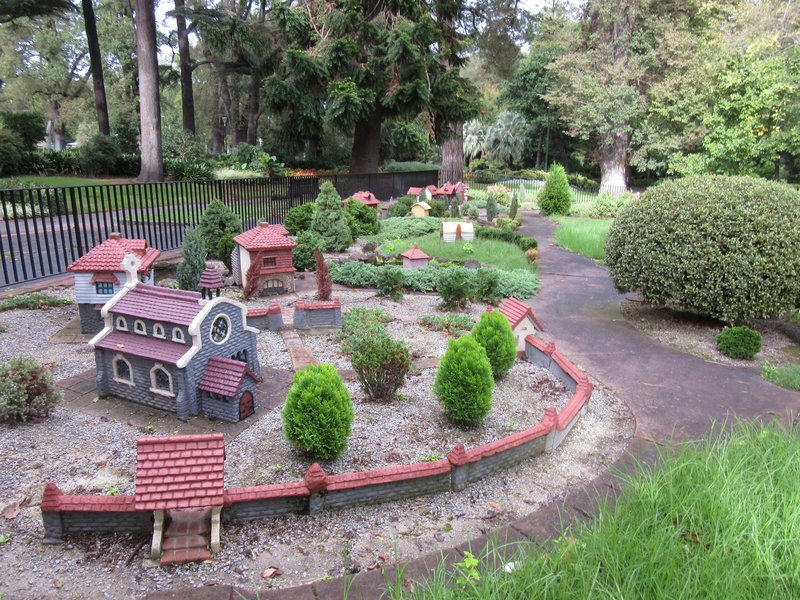 My last part of "A Walk in the Park" trail, was spent exploring Fitzroy Garden's model Tudor village, located not in a building but in the open air. In 1948, the Tudor Village was created by 77 year old Edgar Wilson who made all the buildings from cement and then painted every one of them. I thought it was quite good, probably if your from the U.K., you would know the styles and what the buildings were used for. The village has many thatched cottages, a village church, school, hotel, barns, stocks, pump, and all public buildings which make up an English village. Also included is a scale model of Shakespeare's home and Anne Hathaway’s cottage. It is free to view. 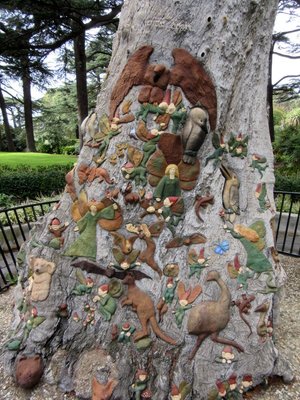 I didn't have to wander too far to see the "Fairies Trees," the creation of clever artist "Ola Cohn" who has carved many shapes into the stump of a 300 + year old Red Gum tree. Cohn took between1931 to 1934 working on carving fairies, dwarfs, gnomes, Kookaburra, koalas, flying foxes and many other Australian animals and birds, then painted the lot. When finished she gifted her beautiful work to the city's children. 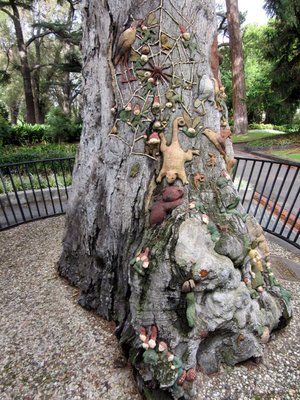 At this end of Fitzroy gardens I found a nice fountain, well laid out gardens and an excellent childrens playground. 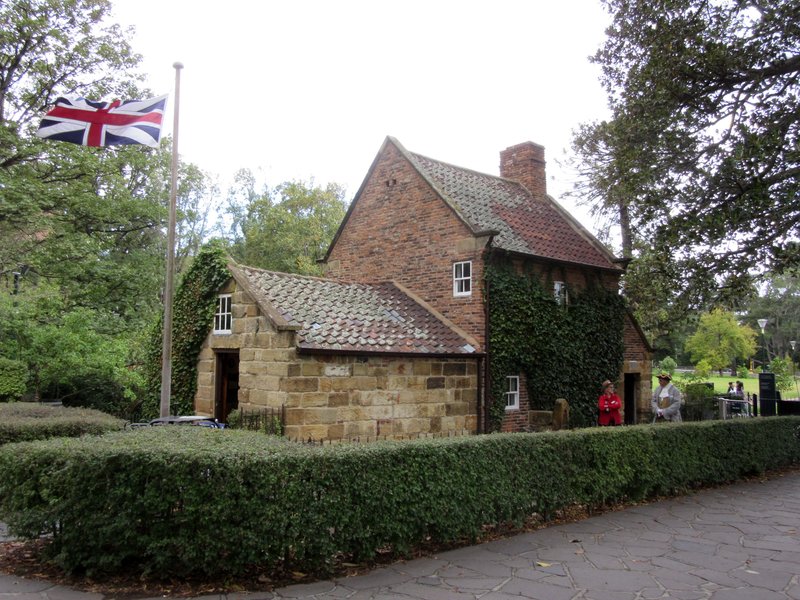 My walk back through the gardens towards the CBD took me to the most famous building in Fitzroy Gardens, and that is "Cooks Cottage."
This is a gorgeous small cottage that shouldn't be missed. It was decided to buy the cottage for Victoria's centenary in 1934, how-ever the owner (Mrs. Dixon) wanted it to remain in Britain. In the end she gave in as "Australia" was part of the Empire. Brick by brick the cottage came down, each brick numbered and put in a crate and shipped to Melbourne.
Most people think Captain James Cook lived in this cottage, but if he did it was not for any significant time. It was the home of his parents, James and Grace Cook who in 1755 built the cottage in Great Ayton, Yorkshire. It was pointed out to us the "1755" and the initials "JCG" over the doorway, believed to be parents James and Grace Cook. There is an entry fee to see the inside of the cottage which has plenty of history and the cottage garden with plants and herbs the Cooks would have used in dishes when they were alive. 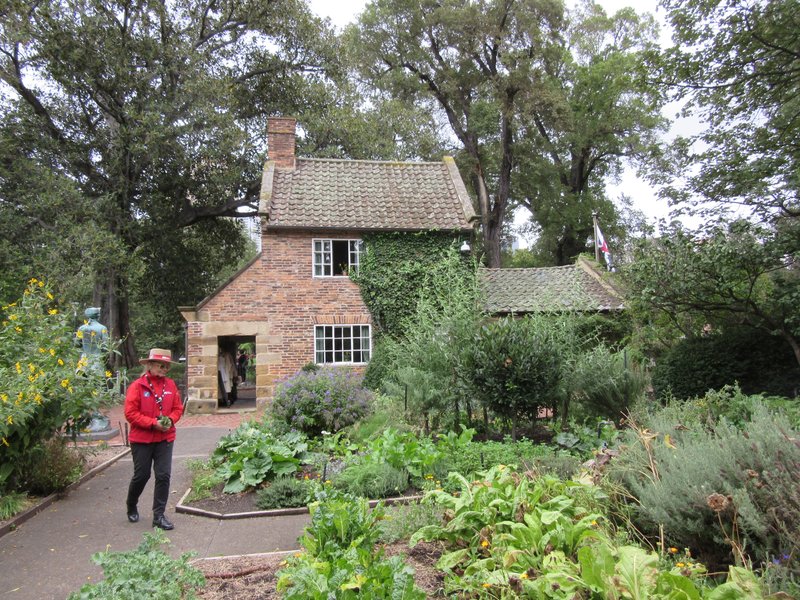 If you do have a look at the interior of the cottage, tall people need to bend their heads to get through the doorways, people must have been quite short back then.
Cook's Cottage is the oldest building in Melbourne and Australia

There are a total of 32 sights to see on this walk, I have only mentioned a few.